The deck is almost done.  It needs to be stained and something (like a pot) needs to be installed for the rain chain water to fall into.

There was a bit of drama…maybe drama isn’t the right word, but while our contractor was on a much needed vacation to exotic locations, his worker-bee began to install the fence on the side front of the house.  He sent us a picture and it wasn’t quite what we had in mind.

The deck skirt was also installed, which was not quite what we had in mind either. 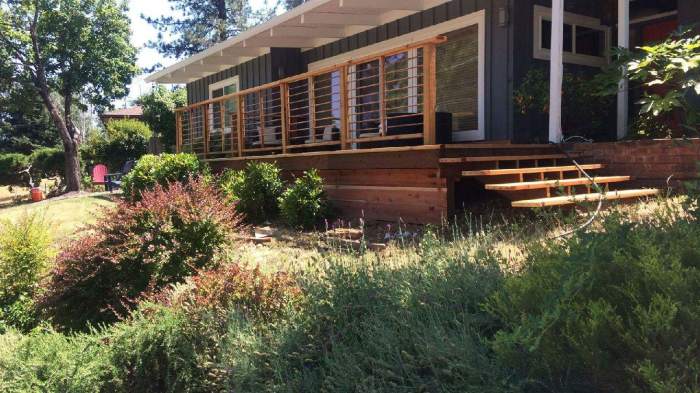 We wanted horizontal boards, but we wanted at least a 1″ space between the boards.  So, no sooner had our contractor returned from his vacation then he was at our house fixing the problem.

You can see the nice spacing between the boards allowing light to come thru.  He also varied the size of the boards, which turned out to be a subtle and beautiful idea.

I really like this look and now our neighbors can’t see into the messy side yard…well, once we get the gate in.

And here’s the deck skirt looking like it’s supposed to look.  So pretty.

We have done a lot of remodeling on this place and we also remodeled our last home.  So, I have learned not to panic when something goes awry or there is some sort of misunderstanding with the contractor.  The contractors we have used have been pretty responsive to fixing things that have somehow gone wrong.  The key is to get a good contractor whom you can trust and who will work with you (without rolling his eyes every time you think of a change.)  Our contractor is extremely creative and works very closely with us.  I trust him and look to him to come up with ideas that I would never have thought about (like the copper railings on the deck.)

Next up:  The other side (the dark side) of the house.